“Christianity in an Age of Artificial Intelligence” 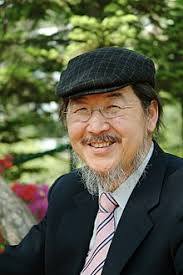 The recent development of Artificial Intelligence brings about serious issues in Christianity and theology. The possibility that Artificial General Intelligence (Strong AI) or Super Intelligence can achieve digital omnipresence, omniscience, and omnipotence challenges the traditional doctrine of divine attributes. The anticipation that AGI or ASI will soon possess superintelligence endangers the validity of Christian theologies which have adopted the logos, a cardinal Greek concept, as the root-metaphor. For the logos in the modern thought has become narrowly defined as a technical reasoning (intelligence) since the Enlightenment. This logos-centralism brought a theological reduction to perceive God as superintelligence, which could be equated with a superintelligent AI. Therefore, the advent of superintelligent AI could finish logos theologies with ultraintelligent and omnipotent God. In hi-tech places such as Silicon Valley, there already appear new techno-religious movements that enthrone and worship AI as a divine status. Furthermore, transhumanists fervently advocate techno-utopian vision that, with the maximum use of science and AGI technology, humans can achieve the paradise foretold in the Gospel, without tears, sufferings, diseases, and even death. This lecture will engage in two major tasks. 1) It critically analyzes these coming issues of AI and Transhumanism. 2) It proposes a major theological paradigm shift from the traditional theology of theo-logos to a new paradigm of theo-dao, adopting a cardinal East Asian concept of Dao (the Way) as an alternate root-metaphor for this theological revision, in and through interreligious and interdisciplinary dialogues with both East Asian religions (Confucianism and Daoism) and sciences/technologies.

Both public and Christian understandings of rage do not recognize its constructive and vital side necessary for transformation to take place. This talk aims to revise current theology and the practice of Christianity by expanding its understanding of rage from a simplistic and narrow view of its destructive nature to a wider definition that encompasses its unrecognized and transformational aspects. Based on Kohut’s understanding of narcissistic rage, I discuss rage in this work that pertains to dispositional rage, i.e., rage manifested in life’s pattern or more likely fused into one’s character.

I also demonstrate the underside of rage with Robert M. Grant’s understanding of Jewish Apocalypticists which gave birth to Gnosticism, the blindside of rage with the silence of the Korean comfort girls-women who were forced into sexual slavery by the Japanese military during WW II and the upperside of rage with the courageous act of Emmett Til’s mother revealing the horrendous injustice done to her son.

In 1955 the “Holt Bill” of the Congress enabled the Holts to adopt eight orphans from Korea. The Holts, evangelical Christians in Oregon, received tremendous media attention and opened doors for countless American families to seek out Asian children to adopt. Oregon Senator Richard Neuberger declared that these families were modern incarnations of the “Biblical Good Samaritan.” What explains the dramatic shift from the image of Asians as strange, despicable “pig-tailed coolies” to the image of adoptable and lovely children in need of American help? This talk examines the Holts’ unconventional method of placing adoptees exclusively in Christian homes. It expounds on the significance of their evangelical theology and the reason for the sharp contrast between their philosophy of adoption and the social workers’ policies. Specifically, the chapter examines the significance and perils of the “proxy adoption” that the Holts advocated. Contrary to the prevalent understanding that exalts Harry Holt as the sole charismatic individual who popularized transnational adoption, this study argues that prior to his activities, other key individuals were involved in transnational adoption. Moreover, the study refutes the dominant viewpoint of social scientific works that equate his humanitarian activities to militarized American imperialism. 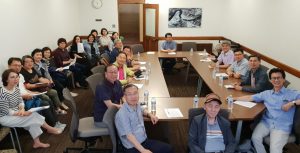 “The Candlelight Protests, Democracy, and Christianity in Korea”

More than 1.7 million people peacefully participated in twenty candlelight street rallies in South Korea from October 2016 to March 2017. As a result, president Geunhye Park was impeached, indicted and imprisoned, and a new president, Moon Jae-In was elected and inaugurated on May 10th. Along with the candlelight rallies, there were the so-called “Korean National Flag rallies”, a kind of reactionary movement. Korean Christians were politically divided in the process. From a formalist viewpoint both rallies seem to deserve equal political value, but from a judgmental viewpoint the rallies are differentiated by their motivating political values. By experiencing these events, Korean Christians become politically enlightened, and a recent poll shows that the differentiated political views among them reflect their ages and cultural backgrounds.

Koreans who lived and worked in Riverside, CA in the early 1900s were strongly connected with the local Calvary Presbyterian Church. Official Korean immigration to the United States began on January 13 1903 when 102 Koreans came to work on sugar plantations in Hawaii. Many of those pioneering Koreans left the Hawaiian Islands for the United States mainland to find better paying jobs and living conditions. When Koreans migrated to the mainland they ended up in places like Riverside where the citrus industry was thriving. At the time, Calvary Presbyterian Church was located at 9th and Lime Streets in Riverside and welcomed members from every walk of life and of every ethnicity. (In 1936 the church moved to its current location at 4495 Magnolia Avenue in Riverside).

Many of the Korean immigrants were Christian converts and had come to the United States with the blessing of their home churches in Korea. It was logical that these Christian Koreans would seek a church they could join and seek help from. In 1905, attracted by Pachappa Camp and the Korean Labor Bureau established by Dosan Ahn Chang Ho, Koreans began to move to Riverside in large numbers. Koreans who came to Riverside presented themselves to the elders at Calvary Presbyterian Church and requested admission. The church kept detailed records of the Koreans and other ethnicities in the area in their session of minutes.

The church and its leaders and members played a vital role in assisting the growing Korean community at Pachappa Camp. The church established a mission at the camp sometime in 1905. The church provided the Korean settlement with teachers for English classes, loans and charitable donations, and guidance. Calvary Presbyterian Church is closely intertwined with the Korean American history in Riverside. Individuals including Cornelius E. Rumsey – a church elder in the early 1900s – and the church’s pastor helped the Koreans and Pachappa Camp adapt to life in the citrus rich community.

“CHRISTIAN MISSIONARIES AND KOREAN POLITICS, 1895–1910”
From 1883 to 1905, Korea maintained full diplomatic relations with the Unites States through five American presidents. Protestant missionaries were welcomed into the Chosŏn Kingdom by 1886 withfull privileges of establishing schools, hospitals, printing press facilitiesand the right to purchase private property. Missionary endeavors thrivedduring this periodalthough Japan made her first bid to seize Korea afterthe Sino-Japanese War in 1895. Queen Minof Korea, an ardent opponent of Japanese aggression, was brutally murdered in October 1895 by Japanese hands. A group of missionariesin Seoul put themselves in harm’s way and sat with the King for days,as he found himself in a dangerously unstablepolitical arena. Their motive was to lend symbolic support for the Korean crown and they were successful, although reprimanded by the American Ambassador Sill.American President Cleveland used his good offices to lend continued support for Korean sovereignty and the Japanese had to take theirarmy home.

The political landscape changed in Washington with the unexpected comingof young and militant Theodore Roosevelt to the White House. By 1904,the Japanese had built a powerful navy with foreign ships and western banksin America, London and Berlin financed the Japanese attack on the RussianNavy in Feb. 1904. With the tacit backing of Theodore Roosevelt,the Japanese seized Korean sovereignty in 1905, through a ruse and forcedEmperor Kojong’s abdication in July of 1907. The majority of western missionaries withdrew from political involvement during this period and remainedsilent on the Japanese takeover of Korea, even as they continued to promotethe growth of the Christian church. Although they would begin to changetheir minds by 1912, as Japanese rule increased in brutality, the damagewas done to the cause of an independent and sovereign Korea and anhistorical blackout remained on this brief period for almost a 100 years.This paper will explore why the missionaries reversed their support for theKorean Crown in 1904 and by what rationale were these decisions made.

April 30, 2015. 12:30-1:45 pm Dodd 121: “Human Trafficking and Korean Christians”  Human trafficking – particularly sex trafficking – has been a long-standing social justice issue for South Korea. While this issue is not at all unique to nor more accentuated in Korea (for it is a global pandemic), the local responses to sex trafficking has been varied. During this lecture, two contrasting responses to combat the issue of human trafficking will be analyzed: one more activistic and policy-engagement, and the other more incarnational and less engaging with policy-making or campaigning for its eradication. This talk will raise further issues of Diaspora Christianity and its influence on the way Korean Christianity is evolving. 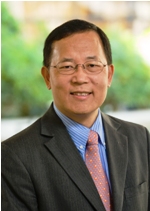 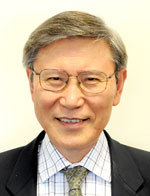 “The Korean War (1950-1953) and Christianity: North Korean Reactions to the Pro-American Activities of the Christian Churches”

“Evangelization of the World in this Generation: Korean Students and the American Foreign Mission Movement, 1919-1945”

“Christianity in China, Korea, and Japan: Past, Present, and Future”

“Syngman Rhee and the Christian Transformation of South Korea, 1948-1960”

“Nationalism and Christianity in Korea”